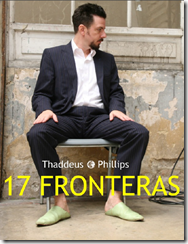 This internationally acclaimed play arrives at TEATRO JACO directly from Madrid on a world tour. 17 BORDER CROSSINGS will be performed January 19 through January 29th, Thursday through Sunday at 7:30 pm at TEATRO JACO, located in OCEANS Center Jaco on Ave. Pastor Diaz in Jaco Beach. Sunday evening shows will be performed in Spanish. Ticket prices are $35.00 for Main Floor seating, $20.00 Balcony, Sunday’s Spanish language performances are specially priced at $17.50. 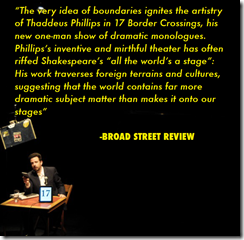 Collected over 15 years of international travel, “17 Border Crossings” weaves together real adventures of international border crossings into a dramatic examination of imaginary lines, arbitrary passports and curious customs. It explores a world opened up by the fall of the Berlin Wall on 11/9/89, sealed off by the events of 9/11/01, and reimagined after the protest of Mohamed Bouazizi, the Tunisian fruit vendor who on December 17, 2010, said ‘enough is enough’ and thus started the revolutions that became known as the ‘Arab Spring.

The company tours extensively to theaters across the world. Phillips trained at DAMU in Prague and with Encho Avramov and the Czech director Josef Krofta. His work has been seen OFF-BROADWAY at the BARROW STREET THEATRE and at NEW YORK THEATRE WORKSHOP, and in Seattle, Albuquerque, New Haven, Chicago, Denver, Philadelphia, Tampa and internationally in Spain, México, Holland, Czech Republic, Italy, Slovenia, Ireland, England, Scotland and Serbia.

Special arrangements and discounts are available for groups of 10 or more including post show discussions with the show’s creator, Thaddeus Phillips. Discounted “ Stay and Play in Jaco Beach “ vacation packages are available with luxury condos and hotels in Jaco.  For more information: faith@oceanscenterjaco.com 506 2 630 9811.